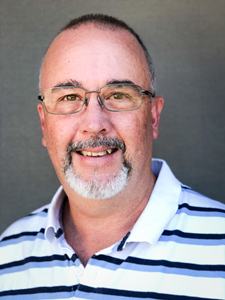 Andrew has been a part of the Grace Bible Church network for some time, first serving as a deacon at Holland Park and now at Corinda.

Andrew grew up in a Christian home and was part of a Baptist church in Sydney where his father was the pastor. While he always attended church and church functions, he only seriously saw his need for God to work in his heart from his mid teens. He did not want to commit his life to Christ if he was sitting with one foot in the world and the other in the church. He was baptised in his early 20’s and went on to be a deacon in the church in Sydney.

Andrew moved to Brisbane in 2005 with his wife Kim and their two sons. They quickly settled into the Queensland lifestyle and started attending Grace Bible Church at Holland Park in 2008.

Andrew loves fishing and boating, solving practical problems and challenging himself. He gets plenty of opportunity to put his skills to use as he works at a private primary school as a maintenance manager, and uses his knowledge of the building trade to serve the church here at Corinda with all the practical issues that pop up.